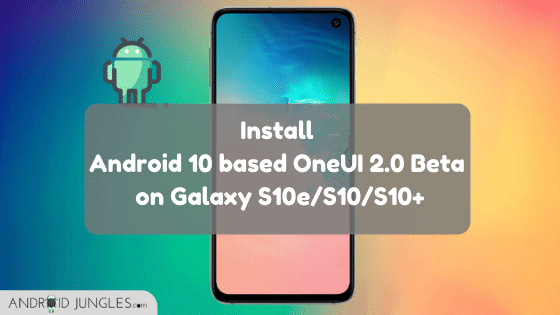 Recently Samsung announced the Android 10 Download for Snapdragon Galaxy S10+ One UI 2.0 beta OTA update zip [T-Mobile USA]and now we have the Download links for the OneUI 2.0 Beta Firmware Program along with an installation guide to install One UI 2.0 Beta on Galaxy S10, Galaxy S10+, and Galaxy S10e using the Stock Recovery Method. This Beta program might be extended to the Samsung Galaxy Note 10 or Note 10+ in the coming time. Stay updated to know more.

Note that the OneUI 2.0 Beta firmware, which is based on Android 10, is currently compatible only with the Samsung Galaxy S10 series devices. Here is a list of the supported devices –

How to Opt for OneUI 2.0 Beta OTA Package on Galaxy S10 devices?

The official OneUI 2.0 Beta firmware Program was recently announced, and it began with some eligible devices in South Korea. As per the SamMobile report, this beta program is now available for the Samsung Galaxy S10 Snapdragon variants in the US as well, along with extending for countries like India and Germany very recently. 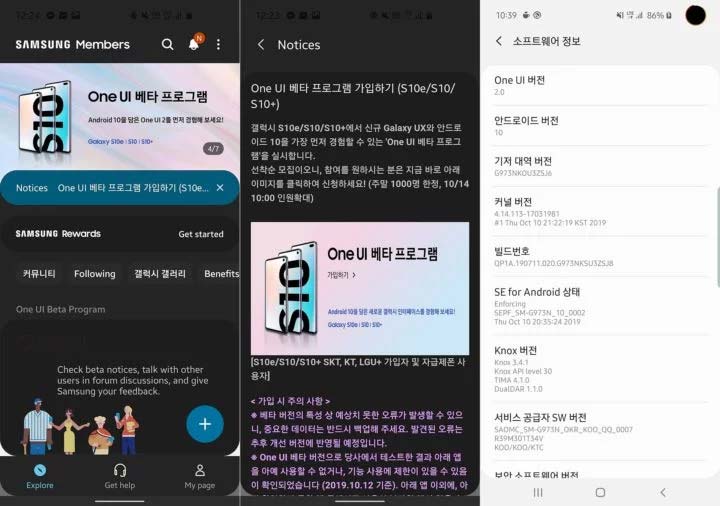 If this Beta Program is not available at your region, you can just go ahead, scroll down this article and download and install the OneUI 2.0 Beta Firmware update manually as per the guide and links are given below.

Do have a look at how to Download Stock Firmware for Samsung Galaxy S10e/S10/S10+ update via Odin FlashTool.

As mentioned earlier, the OneUI 2.0 Beta firmware is actually based on Android 10, and hence, it is quite intuitive that the Android 10 goodies will be a part of it. Features of the Android 10 OS like enhanced privacy controls, Focus Mode, system-wide Dark Theme, Live Mode, Focus Mode, Smart Reply in notifications, highly improved gesture navigation, and so on will be seen in this Beta firmware update.

The system-wide dark mode is now no new to Samsung devices. But the change here is that unlike the Android 9 Pie running devices, the OneUI 2.0 Beta comes with a System-Wide Dark mode that has been extended to the Home Screen and the Lock screen as well.

Now is that not amazing? A truly System-Wide Dark Mode? The brightness, as well as the color of the icons, texts, images on the Home, and the lock screen, will be much better to see in the dark mode. This dark mode for the Lock Screen is named as ‘Smart Lock Screen’. 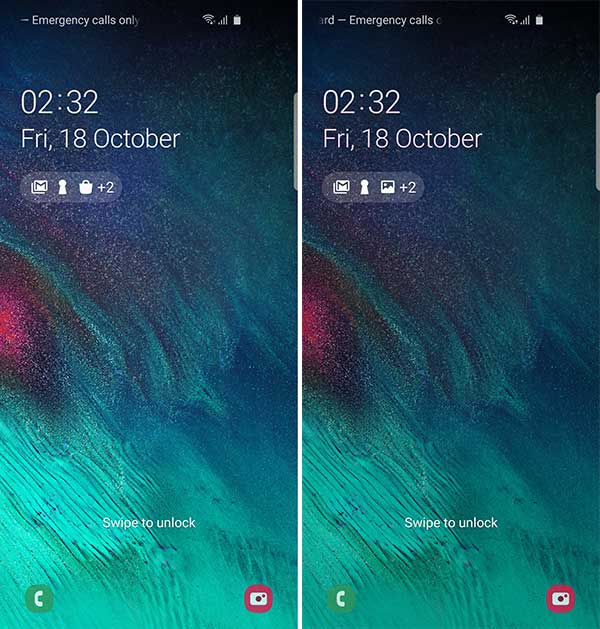 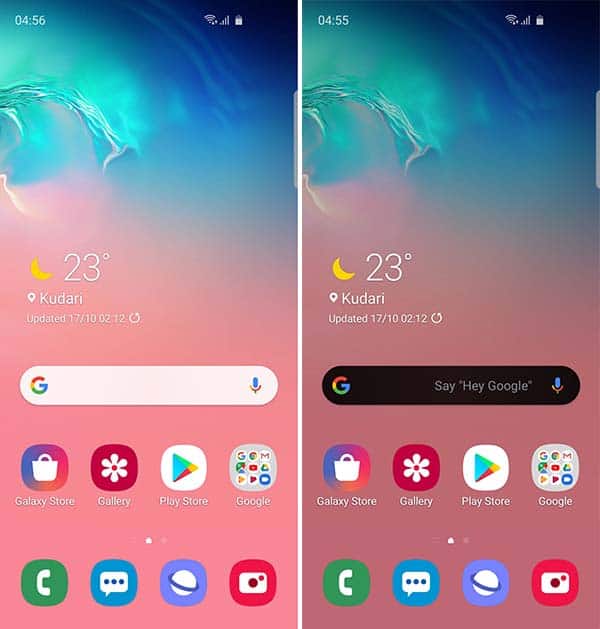 Although Intuitive Gesture Navigation might not be as much interesting to people, let me tell you it does play a major role in your user experience. This feature, similar to one seen on the Pixel Android 10 smartphones, is now available for the Samsung users as well.

As usual, the Korean OEM has again focused on the simple and streamline interactions by improvising the User Experience. The space that some elements used to take on the screen has been critically minimized. This includes the calling notification and volume control bar.

Both these notification pop-ups that most of the users found disturbing while using the phone have now been considerably minimized. So no more disturbances on the way while you are watching a movie or playing a game. You will receive the notifications properly, but their size won’t bother anymore. 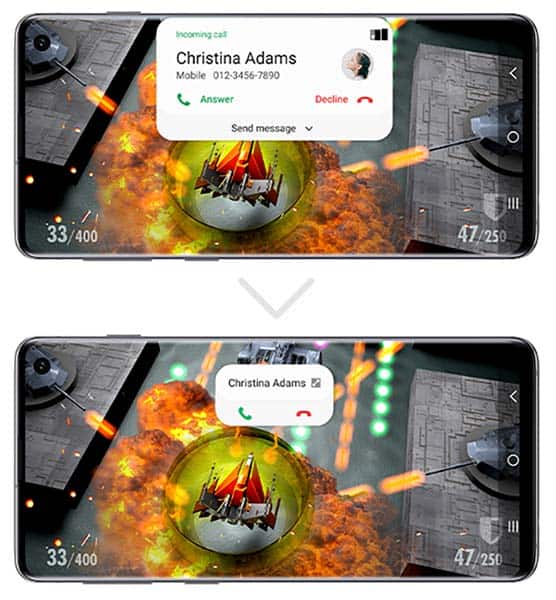 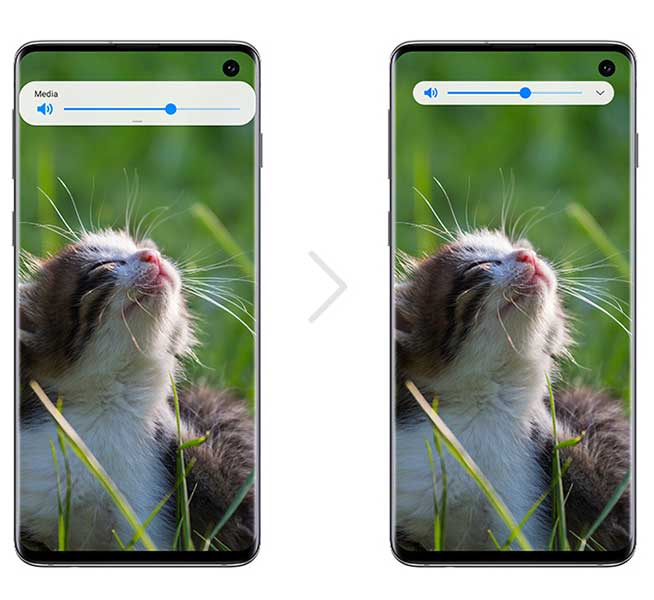 This mode allows the user to truly focus on what they are doing on their device without letting any distractions affect them. One can avoid the notifications from apps that they have enabled in the Focus Mode. A whitelist can also be added that will keep up with those apps in that list.

The OTA Package of OneUI 2.0 Beta firmware based on Android 10 is now available to download for Samsung Galaxy S10 Series devices, including – S10, S10e, and S10 Plus. This beta firmware package has the build number – ZSJ8 and has October 2019 Security Patches.

Just note here that the Exynos variants come in the ‘.bin.’ Format and after downloading, you will have to rename it as “update.zip”. Also, make sure to download the appropriate OTA Package as per the model number and phone name of your device.

Here is a list of requirements that one must fulfill before following the guide and getting into the installation of OneUI 2.0 Beta firmware on Galaxy S10 devices.

Assuming that you have followed all the above prerequisites and made a note of the notes given below, we can begin with the guide –

The Update will now begin to install. The progress of this installation will be shown at the bottom of the screen. It might take some time to finish this process hence be patient until then. Just make sure not to disconnect the device until the update is totally installed. Your Samsung Galaxy S10 Device will boot once the update is finished.

I hope the article was of use. In case of any doubts, let us know in the comment section below. We will be happy to help. Stay tuned for more such updates!