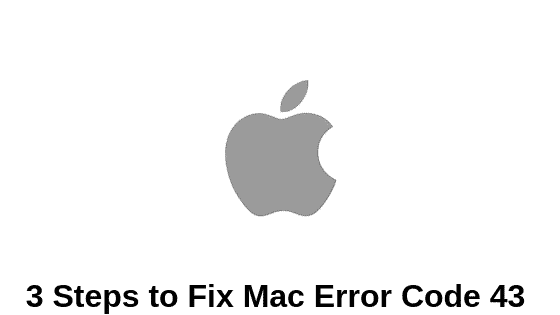 Fix Mac Error Code 43: Being the most widely used Computer Operating System following Windows, Mac, as has its own advantages, at times displays some errors too. I find no need to mention what standard Apple brings for you. Mac being one of its outcomes is undoubtedly one of the best OS Programs around the globe. Apple lovers always prefer Mac over anything and to be honest all of us do! But even machines come with some faults. And this is what we will be sharing with you all today.

Mac Error Code 43 is one of the most commonly occurring errors and though you may find it quite difficult to tackle this error but let me tell you there is no such thing to worry about. “The Operation can’t be completed because one or more required items can’t be found. (Error Code 43)”– This is what the Mac Error Code 43 looks like. There can be a number of reasons for this kind of error. Some of which are listed below:

You can tackle Mac Error Code 43 by adopting any of the methods given below.

PRAM and NVRAM is the abbreviation for Parameter Random Access Memory and Non-volatile Random Access Memory, resp. Basically, it is a minor memory used by Mac OS to save certain settings so as to fastly access them. When you reset NVRAM or PRAM, for 98 of 100 times, you see your error fixed.

Read more: How to Fix Snapchat Could not Refresh Error.

As we mentioned earlier, Locked files could be a reason that you have met up with Mac Error Code 43. In order to fix Mac Error code 43 caused due to locked files, the steps mentioned below can help.

That was it about fixing Mac Error Code 43. I assume you all have solved your Mac Error Code 43 issue by now. If not, or if you have any questions, do let us know in the comment section below. We will get back to you ASAP.

Keep visiting our page- Android Jungles or you can also subscribe to our Newsletter if you wish to receive timely notifications of such helpful posts in the future.